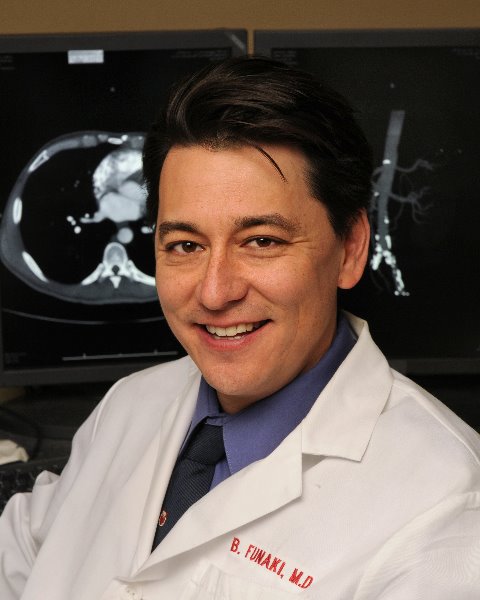 Dr. Brian Funaki, MD, is Professor of Radiology and Chief of Vascular and Interventional Radiology at the University of Chicago Medicine. He performs the full range of vascular and non-vascular interventions, including angioplasty, stenting, thrombolysis and embolization, as well as transplant-related procedures. Dr. Funaki's research activity is focused on vascular intervention, gastrostomy, and embolization. He has more than 200 publications listed in the U.S. National Library of Medicine on a broad range of vascular and non-vascular image-guided interventions. The vast majority of his research is focused on patient care and immediately translated to clinical practice. Throughout his career, Dr. Funaki has been appointed to many scientific and academic committees. He has been a member of the Executive Council of the Society of Interventional Radiology and chaired SIR annual meeting, as well as IR sections of RSNA and ARRS. An avid writer, he has authored multipe books and book chapters. He is frequently invited to contribute articles and editorials for scientific journals, and has presented over 200 invited lectures at universities and national and international medical meetings. Dr. Funaki is an associate editor of the Journal of Vascular and Interventional Radiology. He served as editor-in-chief for Seminars in Interventional Radiology from 2004-2011, wads co-editor in chief of Updates in Interventional Radiology and is the Deputy Editor of Canadian Association of Radiology Journal. He has earned many awards and distinctions, including being listed as one of the "Best Doctors in America" by Best Doctors Inc. and Chicago's Best Doctors over 10 times.